Difference between two-toed and three-toed sloths

Sloths: What’s the difference between a two-toed and three-toed sloths?   Sounds like the start of a corny joke or trick question, right? Well, aside from the obvious and not particularly funny response — one has two toes and the other has three — there are actually a lot of remarkable differences between them. But before we talk about what makes them so different, let’s look at some of their similarities.

For starters, both the two-toed and three-toed sloths belong to the order Pilosa and thrive in the rainforest. These adorable and slow-moving mammals both prefer the higher reaches of the trees, where they are safe from the predators at lower heights. In fact, they only come down to the forest floor once a week to defecate. Sloths feed primarily on leaves but will also sometimes eat fruits and insects. Their digestive system can take up to a month to break down the foliage that they consume, which is one of the reasons they sleep so much. They have been known to graze the leaves of 50 different types of trees, but the cecropia tree is their absolute favorite. Both species often look like they are smiling, though. Costa Rica is home to both the brown-throated three-toed sloth and Hoffmann’s two-toed sloth. You can find them in the rainforests lining the Pacific and Caribbean coasts, as well as in the central cloud forests and in multiple sanctuaries and rescue centers around the country.

The best advice for finding a sloth in the woods is to slow down and look up … you might just get lucky enough to see an irresistibly cute face smiling down at you. 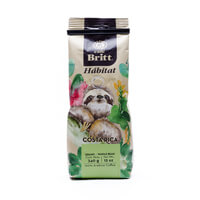