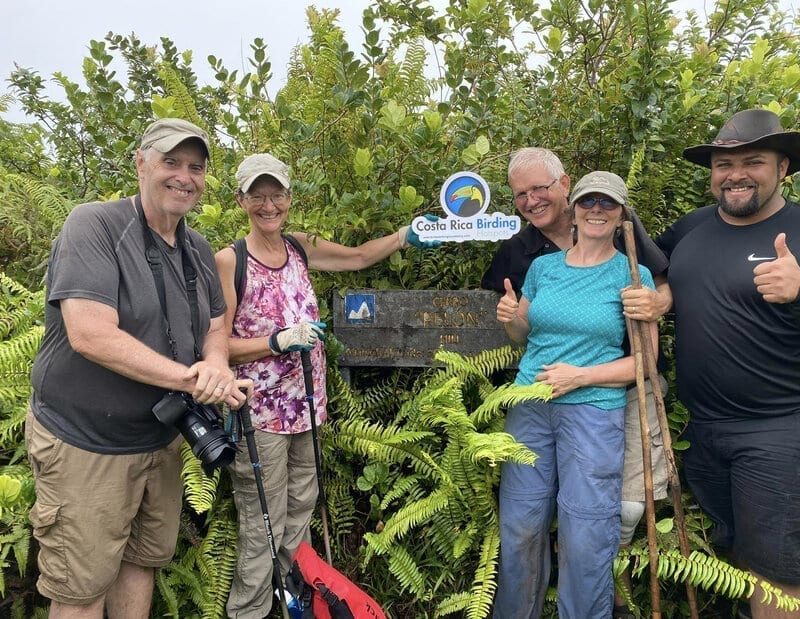 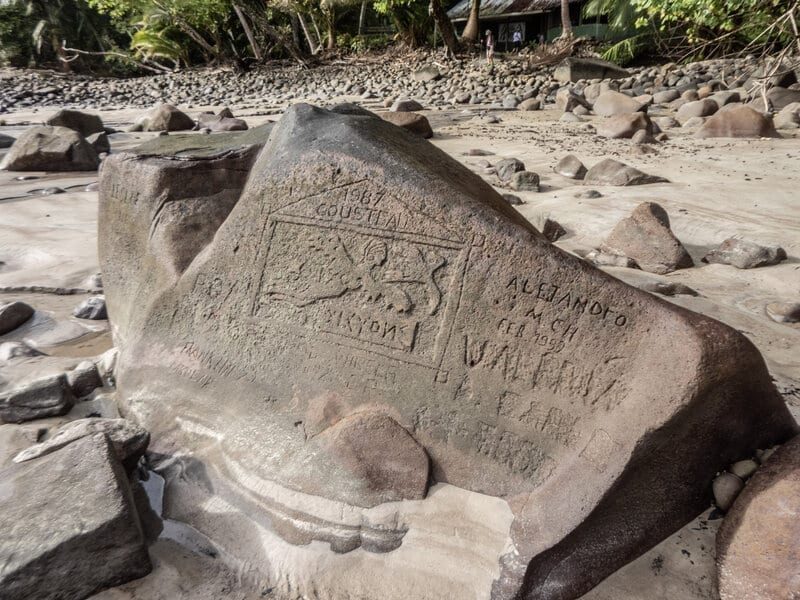 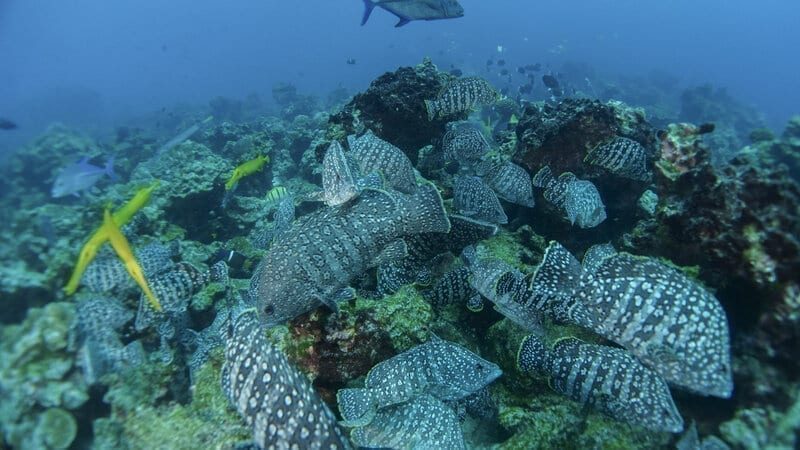 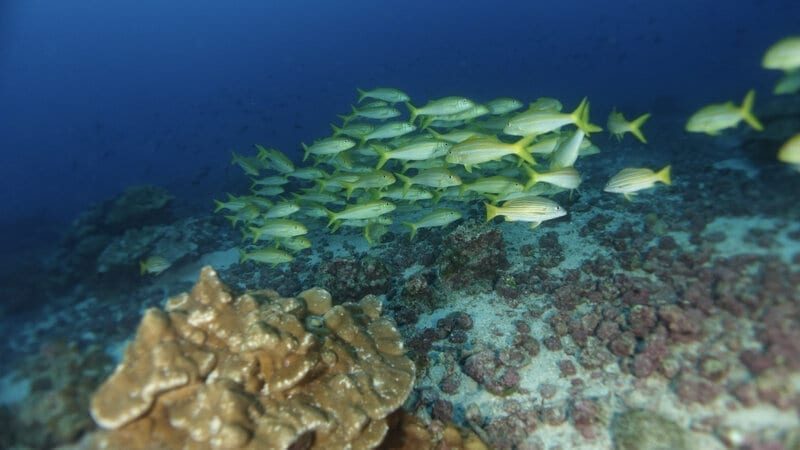 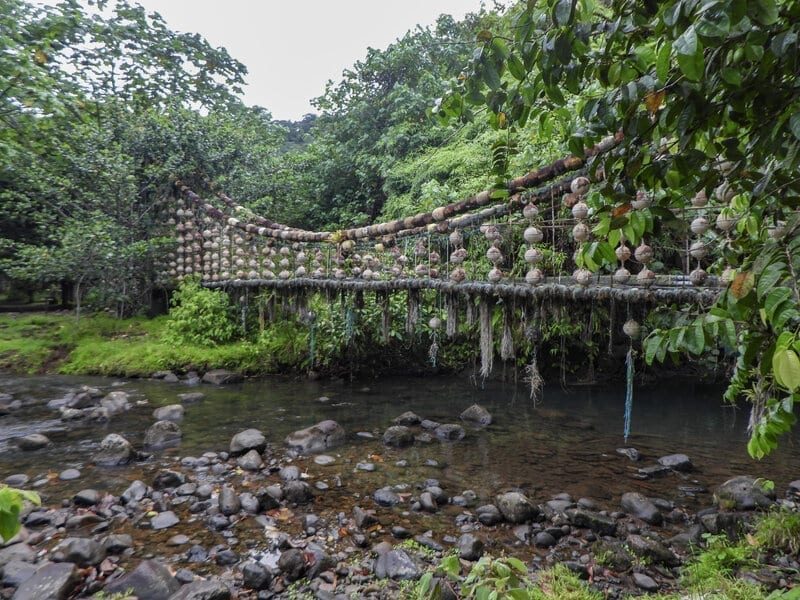 Cocos Getaway Beckons Us Back Again

We were finally there! Our arrival at Isla del Coco through Chatham Bay marked the end of our 36-hour journey from Puntarenas, Costa Rica on board the Aggressor I dive ship. Our anticipation of what awaited gave way to excitement, but there was no customary docking ritual. Instead, our ship was equipped with two pangas (named for the panga fish caught from small boats in southeast Asia) to shuttle us ashore. Chatham Bay has no dock facilities, so all landings are “wet” —  you simply jump out of the panga into the water and wade ashore.

Chatham Bay affords a rewarding walk to one of the most spectacular island vantage points, which we were fortunate to enjoy. We hiked uphill behind an abandoned park station to a lookout, complete with benches and an abandoned new facility said to be a gift from the United States. The view from this overlook is so stunningly beautiful and mesmerizing, we lost track of time sitting there.

We hiked further to the hilltop to view the radar system. This involves climbing up on a ridge dividing Chatham Bay and Wafer Bay, which is the rim of one of two ancient volcano calderas. You can look down into the caldera, which is now the source of water from the hydro electric generation for the radar. We then headed back down, discovering that the trails, which are suffering from neglected maintenance during the pandemic, are much harder to walk down than up.

Wafer Bay, the smaller of Cocos Island’s two safe harbors, houses the currently active national park station. There is another small hydro generation station, and the park headquarters and living facilities for staff and volunteers. Normally the island is occupied by about 30 people, a mix of park rangers, volunteers, Red Cross, firefighters, and even national police to deal with accidents and illegal activities (fishing and drugs). In pandemic mode, only a skeleton crew of seven were stationed there when we visited.

A sightseeing highlight of Wafer Bay is the ”El Copey” bridge, named for the surrounding trees. It crosses the Rio Genio, the source of fresh water and power for the Wafer Bay park station. The bridge was assembled and built in 2006 from five tonnes of fishing lines and buoys seized from poachers entering the waters off the Island.

Artist Francisco “Pancho” Quesada, from San Vito, along with volunteers, built the bridge to protest the constant threat of illegal fishing in the park. It is modeled after the Golden Gate Bridge, but designed so that with the passage of time it’s become part of the environment, slowly covered with moss and other plants,

We ventured out several times in the pangas to the small islands surrounding Isla del Coco.

One is called Manuelita and is famous as a dive spot, and also for the scary face people see on the one side. To us it looked like the mask in the “Scream” movies.

To cut down on travel time to dive sites in the pangas, our ship shuttled between Chatham Bay and Wafer Bay. One day from Wafer Bay, we traveled out to the windward side of Cocos to visit some other little outcrops — the Big and Little Dos Amigos. Why their names are Spanglish I do not know. On pre-20th century maps they are called the Wafer Islands.

These two little islands jutting out of the sea are composed of columnar basalt. If you have ever visited Devil’s Tower or the Giant’s Causeway in Northern Ireland, these are similar geologic features: long columns of geometric hexagons packed like a bee hive,

Photography was difficult with the seas being a tad rough on the windward side of the island. But travel to and from the two Dos Amigos gave some wonderful views of the rugged coast and endless waterfalls pouring off the island.

The bridge was assembled and built from five tonnes of fishing lines and buoys seized from poachers.

All activities on the island must be approved. We got permission to do some hiking, with two trails open to us. In both instances, we did some intense hiking and climbing. Many areas can only be ascended with the assistance of ropes that are fastened to the hill or trees.

The trail between Wafer Bay and Chatham Bay is only about five kilometers in total. It goes from sea level almost straight up to the radar tower at 300 meters, then back to the overlook at Chatham and returning to the bay.

The other trail we hiked is much longer, six kilometers each way up to Cerro Yglesias at 600 meters. Starting at Wafer Bay, we were joined by three of the divers and a crew member. The trail followed another ridge that was the edge of the island’s second, larger ancient volcano caldera. It led through random coffee bushes in an area that was an attempt at a coffee plantation a hundred years ago, then up and up to the world’s lowest elevation cloud forest at only 400 meters elevation. We hiked further up the fog shrouded trail towards the Cerro Yglesias peak, bushwhacking the final 50 meters or so to the summit in tall grass. That’s because the trail was not being maintained during the pandemic, and basically gone.

We arrived to find we had made it to Cerro Pelon, 90 meters short of the highest peak Cerro Yglesias. We declared victory and slowly worked our way down the four hours back to sea level.

The Cousteau Rock: this famous rock carving in Chatham Bay was made by the iconic marine conservationist Jacques Cousteau and the crew of his research ship Alcyone in the 1980s.

Cousteau’s TV documentary specials filmed here helped make Isla del Coco the mecca for sharks that it is today. In his later years, the revered explorer looked back and called it, “the most beautiful island in the world.”

Jacques Cousteau was my childhood hero and idol. I watched every special on TV and I wanted to follow in his footsteps. Pursuing double-degree program studies in marine science at university, learning to scuba dive in 1975 and performing research at Duke University 120 feet underwater, 30 miles off the coast of North Carolina, I knew I was to be the next Cousteau.

But life, and computers, changed all that.

So this trip to Cocos Island in September 2020 was a personal moment for me. Decades after being swayed by the lure and the money of the computer industry and leaving my first love behind, and more than 20 years since I last donned scuba gear, I returned to the sea.

OMG, I forgot how much I loved it.

And yes, yes there were sharks.

Endemic birds and animals, spectacular and unique scenery, Treasure Island and The Lost World … cruising the high seas and getting away from the pandemic-riddled world. There were plenty of reasons to plan an escape to Isla del Coco, with a shark or two as an extra added attraction.

Another trip is planned in December.

Read more about our Cocos Island adventure by clicking here. 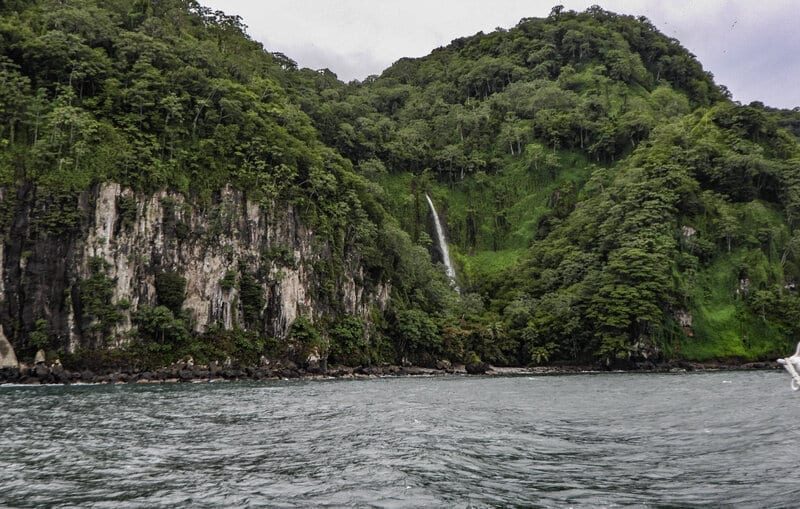