Every month, I enjoy flipping through The Howler and checking out the featured stories of the month. In the April- May issue, I read an interesting piece about The Science of Stoke, and it really got me reminiscing about the proven therapeutic benefits of getting out in the water. In the words of Robert August

I’ve been a pretty lucky guy. I’ve worked hard, traveled the world, caught some incredible waves. But sometimes, things happen in life that aren’t so perfect. I struggled when my mom and dad passed, when one of my girlfriends dumped me for some some drug dealer…

But always unconsciously, I’ve discovered that if I can get to the beach, paddle out, catch a few waves, tumble around in the white water, somehow after an hour or so I get back to the shore, and life’s OK. I can continue feeling good with a clearer head than before.

A few years ago at the Waterfront Hilton in Huntington Beach, we did a fabulous charity event for children with Cystic Fibrosis. Bruce Brown, Mike Hynson and I were all there showing the Endless Summer, doing Q & A, showcasing original items from the film. The kids attending the event spoke about their experiences going to the beach with their coaches to surf. Now, if you didn’t know, Cystic Fibrosis is genetic disease that causes an over-production of thick mucus in the lungs and can lead to a variety of infections over time. We learned that inhaling salt water actually re- hydrates the lining of the lungs and loosens the mucus, considerably extending their life expectancy. Therefore, these children were actually prescribed to surf in order to clear their lungs and combat their debilitating disease. In total, we were able to raise close to $100,000 through auctions, ticket sales, and donations.

In my past 60+ years of surfing, I’ve noticed that incredible things happen out there in the water… And that’s why, even if the waves aren’t very good, get out there, paddle around, catch a couple waves and you’ll get back to the beach feeling better than before. There is truly something therapeutic happening within the waves that I, and all surfers, have experienced. 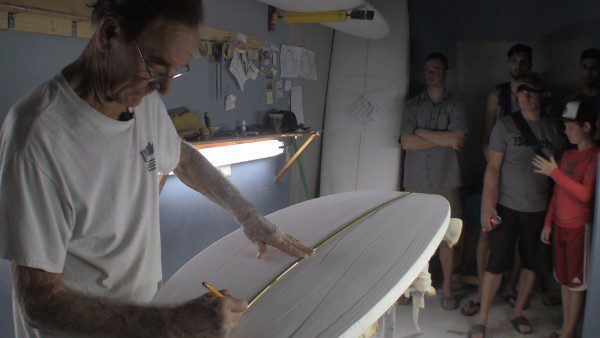